So lots has happened as of late!  I am expanding somewhat, and have started releasing crochet patterns along with my knitting patterns.  The reason for this is that I have tendonitis in my wrists, and I've found crochet to be a little easier on them.  However, having said that, I don't plan on being finished with the knitting patterns, just hoping that going back between the two will be a little easier on me.  I currently have one crochet pattern available, Groundhog Gary, which is on sale as the Pattern of the month for the month of February right now on my new website for only $5.95!  If you haven't had a chance to check out / bookmark the new site, please come have a look!  I'm pretty excited about it!

I'm currently in the process of having a second crochet pattern tested which has been super fun to make, Fergus the Frog, and you can find out more about Fergus as well as see more photos of him on the website as well!  He should be ready for release by mid-February. 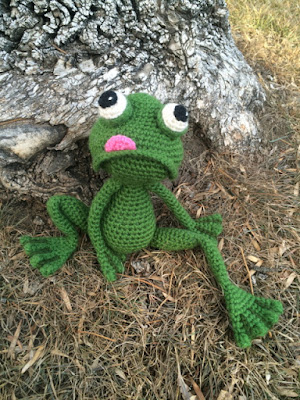 On a personal note, I am now 22 weeks pregnant with baby #5 (due June 9th), which blows my mind every day!  I'm feeling really good, other than being totally exhausted, which is to be expected with 4 little kids running around regardless of being pregnant or not.  Being tired is just my normal, and I wouldn't have it any other way.  We just had our big ultrasound, but decided to leave the gender of the baby a surprise :)  I'm planning on having another home birth, like last time, and I'm excited about that, but it does give me comfort that if need be, we only live 2 blocks away from the hospital ;)

I've been doing Zumba twice a week, which has been progressively getting tougher every time I go, and as of this week, I've started doing Piyo (Pilates/Yoga) every morning.  As I sit here typing, my butt muscles are in tons of pain, as is every other muscle in my body...(sigh).  I have a huge fear of scary labours (because of labour #3) and always feel a need to stay in shape while I'm pregnant so I can rock my labour when the time comes, but man, exercising is not an easy task, especially at 5:30am, which is the only time I have to do it!

Speaking of trying to stay in shape, it's hard to feel like I am even doing so when I'm pregnant, no matter what I do.  People are funny.  I have someone that I don't know ask me randomly at least once a day if I'm "due any day now".  When I respond that I'm only halfway, they always ask if I'm having twins..."Nope, I'm just huge, thanks!"  Anyway, life is generally a wonderful thing.  I honestly love people.  I don't mind the ignorant questions anymore, because hey, I'm kind of enormous and I can't really blame them for wondering.  Most of the time they are people that clearly have not had kids or been pregnant, so they honestly don't know.   Plus they probably (hopefully) feel silly afterwards for asking in the first place, so that thought always gives me some comfort.  This is my 5th baby (and technically my 7th pregnancy), so I think I'm supposed to be huge, right???
Posted by Lise-Anne Michel at 12:52 PM