So, there's been a lot that has happened since my last post....and why have I not been dishing out the play by play of this crazy life of mine you may ask?  Well, because my darling little baby boy spit up (a lot) all over the keyboard for our computer shortly after my last post, and afterwards the spacebar, return and delete keys ceased functioning. 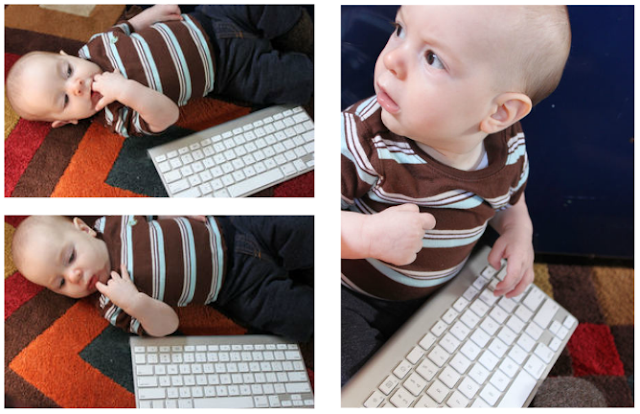 Although I have done my best and been incredibly creative to work around this, I have been waiting {im}patiently to receive the new one in the mail, which my husband so thriftily saved money on by buying off e-bay (and which I resented him for not consulting with me first).  After much incident and frustration, I am now typing on a functioning keyboard.  I choose the word functioning rather than "new" for a reason.  You see, although I was envisioning a beautiful new keyboard wrapped in plastic, what I got in reality was a dusty, gritty keyboard that somebody threw in a box unprotected, slapped a mis-spelled name onto and sent in the mail.  We live 45 minutes from the U.S. border, and so we always have our online purchases shipped to the border store to save on shipping, and then take turns with friends picking up packages that arrive.  Well, this morning one of my husband's friends went to go pick up 3 packages for us (two of which were a watch and a coat that my husband had ordered online and which we weren't in dire need of, and the third one being this keyboard, which I was waiting anxiously for).  For someone who works solely online, a working keyboard is quite a dandy thing to own.  Well, our friend returned with only two packages, saying the border store couldn't find the third one, which of course was my keyboard.  It was a mind boggler, seeing as our tracking number was telling us that the item had arrived.  So after a while on the phone with the border store, the employee finally decided to try spelling our name a few different ways, and finally found the package under Jordan Michael rather than Jordan Michel (pronounced Michelle).  Same thing right?...only different...If you ever go into a doctor's office with my husband the nurse always call out his last name first, as is customary, and so the scene goes something like this:

Everyone in the waiting room turns to look...
and...a short, white guy stands up and follows the nurse away.

People find this hilarious, but trust me, it does get old!  I think the chances of actually seeing a famous basketball player at a doctor's office waiting room are slim to none anyway, so I don't know why anyone even bothers looking.  I'm sure Michael Jordan has his own doctors that come to him.

Anyway, back to the border store...We get this mix up a lot, so it wasn't a huge surprise, but still quite annoying.  So, I spent the next half an hour calling anyone and everyone I know that goes down to the States on a regular basis, but I can't find anyone going any sooner than next week.  I dialled the number of the last person I could think of and she said she was leaving in five minutes!...And yes, she could pick up a package for me.  Ahhh, finally a stroke of good "luck" ;)  I say "luck" because I don't truly believe that anything comes down to luck or chance.  I believe that my Father in Heaven has a sense of humour, but he is also extremely wise and wonderful, and it was time to leave a blessing in my wake.  Thank you!  So, what have I learned (since it is quite clear I needed to learn a lesson of some kind):

Concerning the last lesson, I have a little analogy to share.  Although the context may be a little off, I thought the message still applied...

I am currently the President in the Primary organization at our church, and we had a little teacher training session for all the Primary teachers at my house a couple of weeks ago.  One of my friends and counsellors in the Primary (who's birthday is today, Happy Birthday!) took it upon herself to hand out some very thoughtful and insightful gifts to each teacher as we wrapped up the meeting.  Here's what she gave us:  a mirror, a magnifying glass and a handprint with a quote on it.  As a mother, and as someone who (as mentioned above) needs to be constantly reminded to think of others before myself, I appreciated the lesson that this simple gift represented.  Here's the thought behind each item:

Mirror: reminds us of who the focus should be on...if we look in the mirror we see ourselves, the focus is on us, on what we will teach (or do, as the case may be) today, rather than what they will learn or what we can do to help them and reach out to them (and for me this can be applied to any relationship we may have).

Magnifying Glass: By looking through the magnifying glass our focus is on the children (or whoever it may be) and their needs.  When children are engaged to participate it is more likely that their faith and testimonies will be strengthened, as the quote on the handprint suggests:

I thought that was such a sweet gift, and I've had the opportunity to reflect on it often in the last few weeks with circumstances that I've come across.

Well, since that story took much longer than I originally anticipated, and because it is now time for three little rascals to leave for swimming lessons, I will continue my update at a later time :)
Posted by Lise-Anne Michel at 1:05 PM